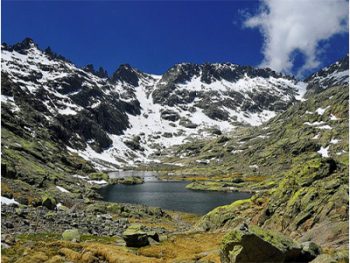 It is an exorheic lagoon, with transparent waters that freezes in winter. It is an oligotrophic lagoon due to the scarce nutrients it receives from its basin. Tourist pressure advises restrictive measures to preserve its hydrological fragility. It is surrounded by the walls of the cresterias of Los Hermanitos, Cerraíllos, El Morezón to the east; by Risco Moreno and Cerro de las Huertas to the west and presided over by the summit of Almanzor to the south.

It presents an average difference in height with the surrounding peaks of the Circo de Gredos of more than 350 m. It has been known among some mountaineers by the term “El Calderón de Gredos.” Next to the lagoon, the José Antonio Elola refuge was built in 1972, from which you can access different points where you can go ice climbing.